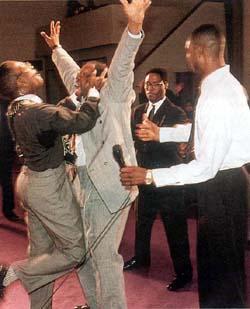 There are lots of other reasons people give for the existence of God besides the cosmological or teleological arguments. However, these two arguments (or variations of them, that I have covered in my last two posts) are the big ones that I wanted to address. I hope I've demonstrated that the arguments have major problems with them, and therefore do not constitute valid arguments for God's existence. But just because these arguments are not valid, does NOT mean I've convinced anybody that God doesn't exist. I may have knocked down two bad arguments for God's existence, but I haven't proved God's nonexistence.

What I'm getting at is the fact that people still believe in God without rational arguments to support that belief. That's why every argument for God's existence could be swatted down (and they have been by others besides myself), and still, belief would persist. It's naive for people to believe, as some "New Atheists" do, that belief in God will cease because we have disproved all theistic arguments. Belief in God will live on even if all rational arguments for God are dead.

So why does belief persist without evidence? There are many reasons for belief beyond reason: belief in God is natural for humans because of our human nature, belief is comforting and reassuring, belief helps us belong to social groups by reaffirming social bonds, belief helps us cope with tragedy or uncertainty, etc. The list of reasons is long. But notice that these reasons for belief have nothing to do with logic or rationality. They are emotional, psychological, and sociological reasons rather than rational and empirically based reasons. Evidence just isn't that necessary for belief.  Rather, the believers world is infused with meaning, purpose, and spiritual experience that only makes sense with God in the middle of it all. Take God away, and life seems devoid of something vital and necessary. Therefore, God doesn't go away even if good reasons for God's existence do. Other reasons are found, beliefs are modified (but persist), and belief survives.

After all rational reasons for God's existence are depleted, the believer usually falls back on a few fail-safe answers for the hope within them. No evidence or argument to the contrary are convincing against these reasons. They are beyond reason because they are NOT rational; that is why rational arguments can't effect them; which is all the betterAnd these reasons, safe from all evidence to the contrary, are religious experiences and faith.

When rational arguments for belief fail, believers will fall back on their personal religious experiences. These experiences come in a variety of forms such as answers to prayer, spiritual impressions, a sense of peace that God is present or aware of the individual, a conviction that your religious leaders are speaking the truth, or that your scriptures are God's word. Whatever it is, these religious experiences are powerful, very convincing, and difficult to dislodge once interpreted for meaning. Joseph Smith, for example, was convinced of the reality of his "First Vision" despite an apparent multitude of naysayers: "I had seen a vision; I knew it, and I knew that God knew it, and I could not deny it, neither dared I do it." It sounds as if nothing could dissuade him from his belief. That is probably true of most people who have had religious experience.

Therefore, I know I'm probably not going to convince anyone to the contrary. However, there is a major problem with religious experiences that should make them less convincing that believers might think:

Religious experiences require interpretation. People interpret their experiences in vastly different ways because they are very powerful, yet VERY VAGUE AND NONSPECIFIC also. And the conclusions people reach are colored by the expectations they have. People who have religious experiences are taught before hand (or during the experience) what they mean. I taught this to investigators on my mission, I taught missionaries how to "identify the spirit" when I taught at the MTC, I taught missionaries how to tell investigators what their spiritual experiences meant. Pretty manipulative.

Therefore, while I do not deny that people have "spiritual experience" (I've had them too), I do content that these experiences require interpretation, and that frequently, the meaning we apply to them aren't justified.